Great start to the week! I went to visit the Cathedral of Salt in Zipaguira which is just a half an hour North of Bogota.

The Cathedral is remnants of an old salt mine, three floors underground the old salt mine makes it impossible for animals to live there. They were just beautiful as many of the Stations of the Cross were backlit by colorful lights. 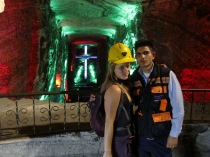 Inside the mine were different stations of where Jesus carried the cross and soft music. We took the tour in Spanish, which was hard for me but is how I am going to learn! There are three levels to the church and actually one of these levels collapsed as the roof was not built properly.

Yesterday I met with my friend Monique who was my Resident Advisor at Streit-Perham Hall at Washington State University. She is here for a month as her family is from here and she went to meet them for the first time. It was her grandmother and grandfather and seond cousins.

Monique and I went to El Museo del Oro and the Botero Museum. It was fascinating to learn about the Shaman and indigionous people that lived in Colombia. They placed significant importance on animals and that the most spiritual leaders of the group had the power of the animal that they would transform into. Some animals included snakes, humming birds, bats and birds. 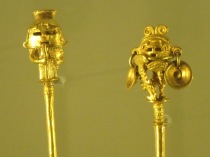 Next was off to the Museum. Botero is a Colombian artist from Medellin, Colombia that is super famous for his paintings and drawings of oversized men, woman, food and animals. He also had sculpture pieces as well, bronze castings. There was one, the woman reclined, that I studied in a art history class. Pretty amazing to see it in real life. I also saw my first Picasso and Chagall! What a treat! I cannot wait to see more paintings and visit more museums. The best part about the museums here in Bogota? There are tons of them and they are free! How about that!

Later that night was Diders father, Jamie Fleiz Cumpleanos. We went out to dinner with his mother, sister and father. I feel so blessed to be able to be apart of a family like that and feel so included! Such rico food! It was delicious dish after delicious dish!

The rest of the night we went out to have some tequila and dance some salsa! It was my first time dancing salsa. Dancing with strangers and seeing my friend from Washington, Monique in such a dream like moment. Monique and I are going to try and meet up in a different city as our travel plans are a little different from each other!

Tonight we are off the a bike ride where over 2 million people ride bicycles and walk in the streets where cars are not allowed! It’s a dream come true!

One response to “Salt Cathedral and Museum”