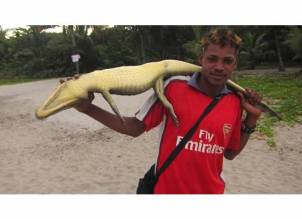 The first day that I got to Palomino I saw a man, or I should say boy, that was holding a dead alligator that he picked up from the river. This boy was posing for the camera and quite a site to see. He was proud of the alligator and claimed that it was dead when he found it. I think otherwise.

I was able to explore the Sierra Nevada’s a little bit as well. I went to Valencia which was a beautiful hike with waterfalls everywhere. We swam in them, super cold and clear and tons of fish swimming all around you! They would swim close but never touch you. The water smelled clean and of fish, so pure and beautiful. I went with a local friend I made that took me on his moto taxi.

Fortunately, but unfortunate for me, the Sierra Nevada are very protected by Colombia in order to preserve the indigenous tribes villages. So if you want to enter the Forest you have to go with a guide that can be quite expensive and take a long time to be able to process.

There is also a famous ¨Lost City Trek¨ which is comparable to Machu Picchu in Peru, but in Colombia. It was a little over my price range and I wanted to do a long trek in Peru so I skipped it. But the Sierras are considered to be sacred for the indigenous so they are keeping the large Nevada’s away from tourists and people not from the area, which I think is amazing. I did get to have some coca with the indigenous and was able to speak to some of them as most have their own language.

Throughout my travels it has always beyond amazed me at how willing the people of Colombia are to share. Even if the people here do not have enough for themselves, they will always always share with you. Something else I am learning about the culture: If someone asks you if you want to share something with them or they want to give something to you (food, jewelry, anything) take it! It is considered rude to turn away people. They ask you if you want something, because they want to give it to you. I love it! I remember being on the back of a truck in the blazing sun in Venezuela and there was a group of us needing water. The only person to have water let each of us have a sip instead of having it all to himself. I love this concept and feel like I do not even do that with my close friends in the States. Its growing on me!