San Agustin – The tombs of the forgotten

Stolen by tomb raider the hundreds of tombs from the rolling hills of San Agustin, the stone figures of the region represent a culture long forgotten.

There are about 10 different sites in the region to view these mysterious sculptures. Each figure representing something different than the rest. The tombs laid on display above ground for viewing. Many of the figures had stone tablets laid across the figures or behind. Some were beneath the ground as well.

My favorite part of the tour was the fuente de lavapatas which was volcanic rock that had flowing water from a stream manipulated and then carvings of animals, people and designs that we’re important to the culture. Just amazing.

The only thing that bothered us seeing over 150 sculptures there was no information on the artifacts or the people if the area. All we were told was what the figures looked like and nothing more! They say that the society that built them was gone before anyone can remember. What a shame right? 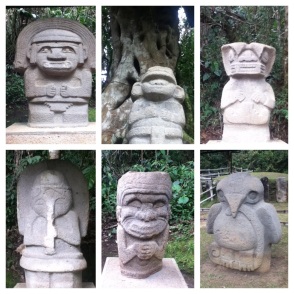 So my friends and I are asking a lot of questions. Why do they display the figures the way that they do? A lot of this doesn’t seem like its protecting he artifacts, rather exploiting them and ruining them. Are there more tombs undiscovered? Who owns these statues and why are many of them shipped to Berlin? Why did the archeologists excavate the area the way they did? None of it made sense.

We left feeling a little disappointed as even some of the tombs seemed too placed and not authenticate. What we discovered later was that no one knows anything about it because no one has made an effort to understand it. We met a man who has lived in San Augustin for 35 years who has been the first documenting the statutes and writing text about each one. It almost seems as if these beautiful pieces are going to rot away as they are not being protected or thought about in a long term sense.

None the less I was so incredibly happy to be in San Agustin and witness what I did. We continued the day seeing many different places with artifacts and two waterfalls. This place is quite magical and lovely to visit. Definitely worth the trip.

The tour for a 8 hour tour of the land and waterfalls cost $30,000 COP ($15.00 USD). The entrance to the archeological park which was a wristband you can take to all entrances.