Happy April! Traveling day! San Augustin to Popayan, which is a little backtracking through one of the worst roads I’ve ever ridden on. 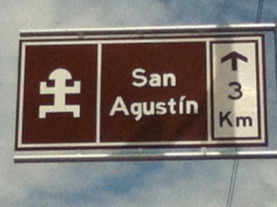 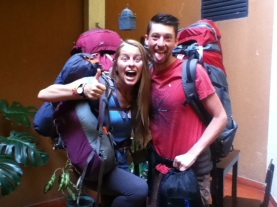 There were two options for crossing the ecuadorian border from San Augustin.

Option 1: Stay south from where we were, however that included some minor potentially dangerous options, and some pretty amazing options. Moca the town we could of visited is known as “the gateway to the jungle” and to visit the Colombian jungle would of been amazing. That was just one bus away. Then you would have to hire a driver to who owns a truck to get you across 6 hours on “the trampoline of death” road as it is a one-way dirt road that is on the ledge of cliffs which in one second toucan easily slip off of. This part didn’t sit we’ll with me, and the fact to hire a driver is quite pricey. The buses are more dangerous to take on that road and are advised against taking. Then the final straw was that we heard a traveler in Jan of 2013 get into some trouble with the paramilitary and said that its not worth traveling as they pose a threat and have been known to steal and mistreat people on their way to the border.

Option 2: Backtrack back to Popayan, and then take a bus to Pasto and then cross the border from there. This is a typical way of getting to Ecuador and recommended. So we decided to do this instead. Seemed faster, cheaper and less potentially dangerous situations.

Out of San Augustin it’s important to but a ticket one or two days in advance. There are few busses and every “day of” inquiry we had, they were always full. We eventually bought a ticket to Popayan with the bus company Cootranslaboyana Ltda- estelar. It is the second bus station from the corner with the tourist information sign. Don’t ever ever go with this bus company. They straight up lied to Steven and I and overcharged as there were more stops than discussed and the bus was one hour later than discussed. It’s one thing to be late, and its another thing to lie about it blatantly. They literally told us the exact opposite of the truth. Really rubbed me the wrong way.

In Popayan at the bus terminal we caught another bus to Pasto which was a 5.5 hours. It cost $20,000 COP ($10.00 USD). You can definitely negotiate the price a bit, especially if there are two or more people traveling together. It was a long and windy road, also tough after a previous 6 hour bus ride.