Tena, Ecuador – The Jungle. Loud animal noises, neon yellow, green and brown luscious trees (bigger than you have seen in your whole life), pounding singing rain for days (literally), poison tree frogs (only if you eat them), unique jungle fungus (not on me, on the trees), hundreds of bug bits, turquoise translucent blue butterflies, dancing moths around lights, and hot heat filled the life of the Amazon jungle.

Tena, Ecuador was my home for almost a week while I painted my mural at Pakay Tours and Hostel, run by a couple, an Ecuadorian man, Tony and German woman, Inga who were more than welcoming and friendly my whole stay. The couple switched speaking languages from German to Spanish to English which was quite an entertaining thing to witness.  I litreally had the best breakfast every morning with granola, yogurt, eggs, coffee (from a french press), milk, bread, homemade jam and usaully something extra and different for each morning.This is one place I wish I was at for longer. We cooked meals at night including a tradtional Ecuadorian meal with fish and vegetables over the fire using palm tree leaves. 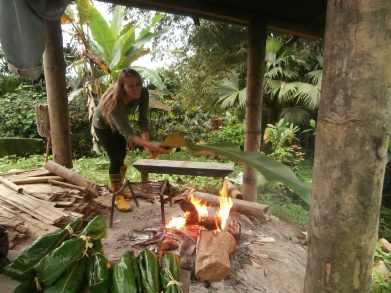 Tony works as a guide through the rainforest and took me and some friends out for hikes and waterfall hunting. One hike was to his brothers property where we hiked for 4 hours.We wore mud boots because it was raining the entire time and we were lucky enough to see poison tree frogs, a fungus called cordyceps , and magical mushrooms. It was rare to see the cordyceps as they are used in traditional Chinese and Japanese medicines and many athletes take it as a form of medicine to heal the body and mind. The fungus feeds on a host, a insect, and will kill it from the inside out. When humans digest the fungus, it is thought to be healing for the human body. Some people pay thousands of dollars for this fungus!

The other hike Tony took us on was a hike to dazzling waterfalls that led to pools where you could swim and jump off cliffs. The rock around the waterfalls made for good water slides as well! It was a beautiful day for swimming, super hot and even had some Ecuadorian boys that asked me to marry them. Now that I speak Spanish it is quite interesting to see some of the ways that men try and pick up women. You could call them very forward! 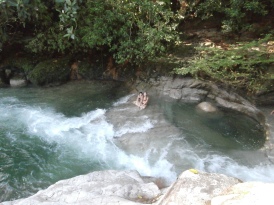 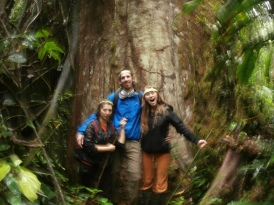 Now, back to the mural.

Where: Pakay Tours and Hostel in Tena, Ecuador, the Amazon!

What: A mural of course! It was a wall that wrapped around the hallway. It was halfway outside-inside and was quite large. The theme was amazon and it was such a pleasure to paint it!

Accommodation: Unbelievable place. The home is made from Panama Palm tree its the name but its really from Ecuador) and is situated in the jungle only a 10 minute walk into town. I was provided with a wonderful bed, and meals for everyday. Breakfast was a luxury as we ate eggs, pancakes, granola,

What I learned: Always wear pants, socks and long sleeve t-shirt while working in the jungle because san flies and random bug will bite you. In this moment I have close to 100 bug bits just on each of my legs. No fun! I learned how to paint dangerously with the help of an added platform to get the high edges, as the ladder wouldn’t cooperate with the stairs. I also learned to paint for longer than 4 hours a day, average was probably 8 hours. I also learned that drinking 3-5 cups of coffee in one day helps painting. 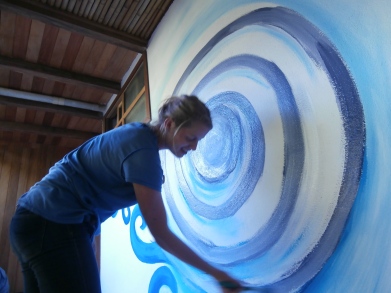 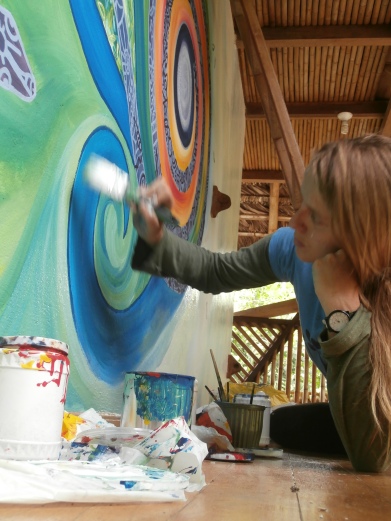