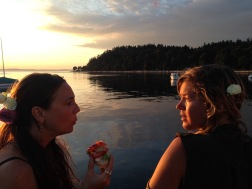 Seattle was a lot of fun but also pretty exhausting! Tour is hard to balance between riding and playing shows. We find it hard to please everyone, but the balance of the group is wonderful because we have open communication and really enjoy spending time together. It is a pretty special group! So after our Mt. Baker show we rode to Vashon Island, we took the sunset ferry across the way. We joined with two Pleasant Revolution members Aaron and Colin who came with some crazy bicycles. Aaon on his tall bicycle and then colin on a tandem! It was fun to have them around, they contributed a lot and Aaron even bought our tickets for the Vashon ferry! So nice! 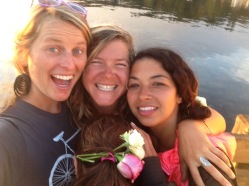 We had some friends on Vashon host us, and we had a beautiful night falling asleep to the orchestra of frogs and animals outside. The next morning I met for coffee with Alice, my old neighbor and friend of my mother’s that I grew up with. She lived next door to our cabin on paradise cove. It was great to catch up with her and get a coffee and treat. Later Michelle, Carolyn, Adley and I went to my mother’s grave and spent some time there. My bicycle flipped over at the grave site. It had never done that before. Of course, we had to got to the bicycle in the tree. The infamous and beautiful tree! I remember going there as a child and seeing the way the tree would change crushing the bicycle alive!

We rode through the island and that was so hilly! So many hills, I tried riding with “SUBrina”, our sub woofer that was made into a trailer. We took the ferry to Tacoma from Vashon and found ourselves in Tacoma at Point Defiance park. My friends Tyler and Robbie that I had met in Ecuador and then later cycled with Tyler last summer on the East Coast, were living in Tacoma. I decided to stay a night with them and we played in the park and enjoyed each others company. It was nice to be with them and enjoy some new friend energy!

The ride 35 miles was difficult as some times and it was just me. I enjoyed riding through the coast and the forest. Below is the Tacoma Narrows bridge that I find stunning! 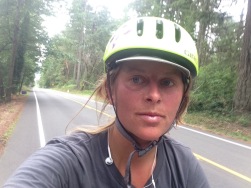 There is a octopus that lives underneath it, one of the largest in the world! The bridge at one point fell in an earthquake. Some of it is new, and there have been stories of orca whales that like to travel under the bridge! 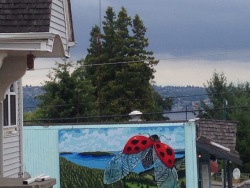 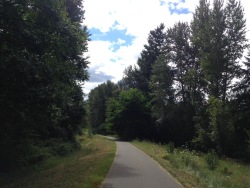 The next day I cycled to Olympia alone maybe 35 miles and joined the group for our show in the Artesian square which had a water well that flowed right through the city. Fresh water you could fill up. Tyler and Robbie came to the show and it was so nice to have them there. The show was wonderful and we ended the day at a friends house and we camped on their front lawn. The capital of Olympia it was fun to experience it in a different way.

The Olympia show is below! Nice colorful mural behind was a great setting for us! 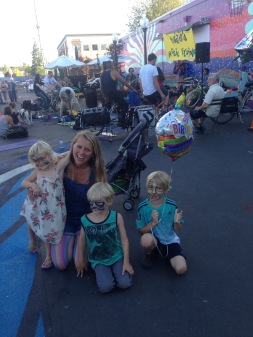 Here are some photos from the event thank you to Bunker for taking them for us! 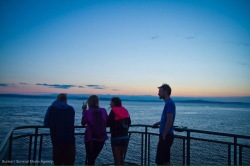 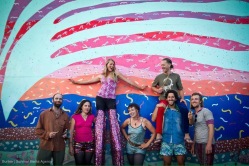 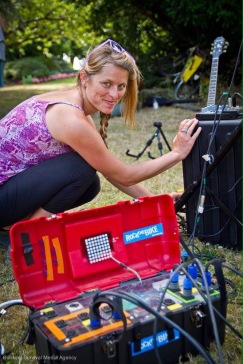